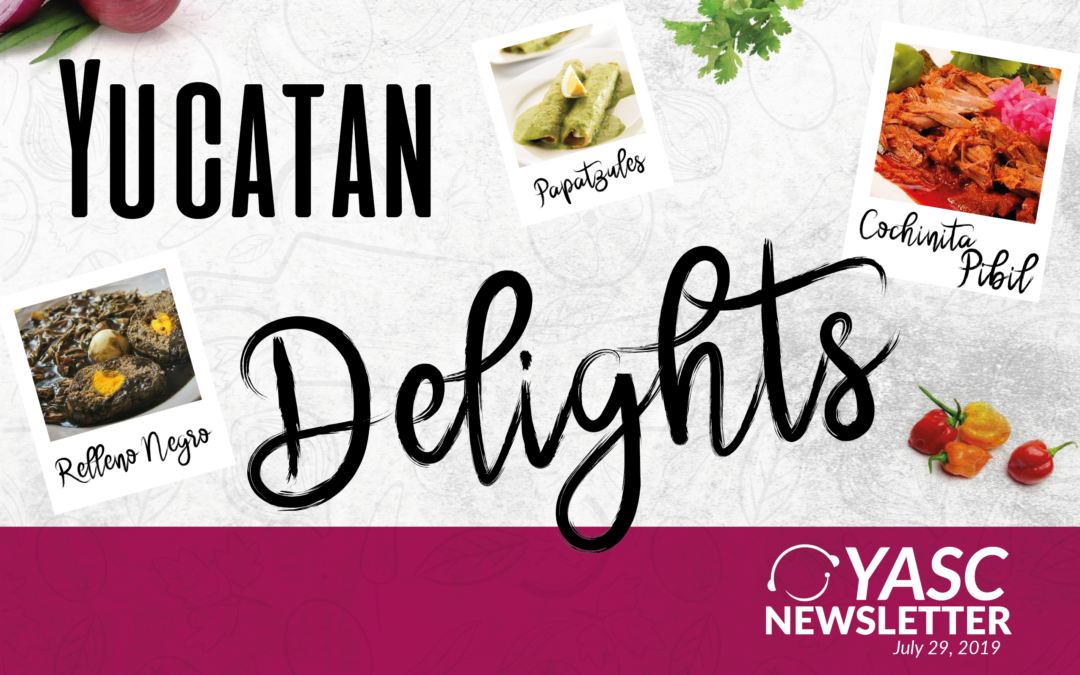 We know that Merida offers us so many wonderful things. It has history, culture, places that takes your breath away, fun and activities all across the city, the ancestral natural wells known as ‘cenotes’ and one of the best culinary arts in Mexico.

At YASC we are very excited to share some of the gastronomy that makes Merida, Yucatán so unique and easy to fall in love with.

Oregano, achiote, sour orange, coriander, habanero, purple onion and some exotic peppers are some of the condiments that makes an exquisite combination in this famous cuisine. YASC is located in one of the most important regions in the Mayan Culture. This is the reason why you’ll find some dishes with uncommon names such as “pibil” meaning ‘bake underground’/ ‘with ashes’ or “papak tsul” which is actually composed of the two Mayan words “papa” meaning ‘food’ and “dzul” meaning ‘love’. As you can see, you’ll find tradition all over Merida Yucatan.

What makes this cuisine so exceptional, is that you will find different flavors, colors and textures in each of the dishes.

Here are some of the typical dishes that you’ll find in Yucatan:

This well-known dish from the Yucatecan cuisine, is pork meat marinated in achiote (a reddish spice grown in the Caribbean), traditionally wrapped in banana leaf and cooked in an earth oven. It’s accompanied by purple onion in sour orange, and habanero chili (the latter, always served separately). This dish is enjoyed with corn tortillas, taco style.

Interesting fact: The term “pibil” applies to food cooked in an earth oven called “pib” meaning ‘baked in’, the meat prepared and wrapped is cooked in the heat of the embers in a dirt hole used as an oven. Its base is filled with firewood and on this, stone plates are placed that will be heated. The meat is then placed on the stone plates and covered with leaves to prevent heat leakage and liquid vaporization. Finally, it is covered, thus enclosing all the heat of the oven. True Mayan culture.

These are pre-cooked tortillas with shredded chicken or turkey, garnished with lettuce and onion. The difference between panuchos and salbutes is, that the panuchos’ tortilla is filled with refried beans.

This dish is prepared in a citrus marinade and then grilled. It is served with a side of rice, pickled onions, refried beans and avocado. Poc Chuc is one of the signature dishes of the Yucatecan cuisine.

An ancestral dish, prepared by the Mayans for hundreds of years. It’s a light and refreshing soup, made with broth, chicken breast, corn tortillas, tomatoes, onion, oregano and, of course… lime juice. It’s magnificent citrus taste, makes this an excellent option for those really hot days.

A traditional dish from the Mayan cuisine, which consists of corn tortillas dipped in a pumpkin seed sauce, then filled with hard boiled eggs (similar to enchiladas) and then finally, served in a tomato sauce topped with onion and spicy habanero pepper (or finely chopped red onions and minced habanero pepper).

A breakfast dish which originated in the town of Motul, Yucatán. It’s made with fried eggs on corn tortillas with black beans and cheese and is often accompanied by other ingredients such as ham, peas, plantains, and habanero chili sauce. In addition to being served in many restaurants in Yucatán, Quintana Roo and Oaxaca, this breakfast dish is also common in Cuba and Costa Rica.

This is a dish prepared with burnt dried chili peppers and turkey. It is one of the most representative dishes of the Yucatecan cuisine. Traditionally, this dish is prepared in the month of November in a festival called “Hanal Pixán” (‘Day of the Dead’).

The original recipe contains turkey and ground pork to make the “but” (meatball), tomato, chilmole, achiote, black pepper, cloves, cumin, oregano, epazote, garlic and boiled eggs. The black color of the stew is obtained by the mixing and toasting of the chilies that are used in the chilmole, among which we can find: ancho chili, black peppers, cloves, cumin, natural achiote, burnt tortillas, sour orange juice, garlic, oregano and salt.

Although this a characteristic dish of the state of Yucatan, it is a ‘half-blood’ dish, since the main element is gouda, edam or ball cheese – of Dutch origin. The cheese is hollowed out and stuffed with ground pork, mince style, with raisins, capers, some fruits and spices, and is presented in “Kol” (a type of white broth made with corn flour) and tomato sauce. It is a very representative dish of Yucatecan cuisine, which, although it does not enjoy the fame of other dishes such as Cochinta pibil and panuchos, is a delight for the palate that likes cheese.